This is a two-owner car purchased by the current owner from a Denver Volvo dealer in 1964 for $1,500. Yes, that's me in the 1964 picture! It sold new in 1962 for about $2,300. It was used as an everyday car for 30+ years until 1994 when it retired from active service. It has in excess of 250,000 miles, which, of course, isn't a big deal by some Volvo standards (e.g. a million miles!). Believed to be one of the nicest "original" 544s around, certainly in the Rocky Mountain region, if not nationally. It is "original" in that all parts are correct and many components are original (e.g. engine and much of the interior) even though the car has undergone a significant cosmetic restoration to very high standards.
In 1980 it was in a front-end accident, but put back to "good as new" at the time. In 1988 it was used as my car for my RMVR Racing School weekend. But it was not raced after that since Team Terrific Racing was already involved with Formula Ford vintage racing.
The total ground-up total restoration was performed in 1996/1997, although the car was always in great shape. This included an engine rebuild, new synchros and layshaft for the transmission, shocks & great paint. The engine was completely overhauled in 1979 and 1996, although it was running fine on both occasions using only a quart of oil every 500 to 700 miles. Most of the interior is original except for front seats which have been redone. While the padded dash was replaced in the late 60s, the headliner, floor mats, trunk mat, and all the door and side panels are original. The car was repainted in 1967 and then again in 1977. Because of the afore mentioned accident, the front was re-painted in 1980. However, the major total restoration in 1996/1997 included a complete strip-down to the bare unibody (engine bay emptied, fenders-off, all badges and hardware removed, etc.) with a complete high-quality repaint in the original color. This included three new fenders (available from Volvo Parts on a next-day basis!).
The basic design work for this generation of Volvos was started in 1943. World War II interrupted, so actual production of the model 444 didn't start until 1947. Few were exported to the United States until the late 50's when production of the 544 model began (one-piece windshield and larger rear window). Starting with the 1962 models the 544 was upgraded to the B 18 engine and the interior trim appointments were improved. The last of the 544s were produced in 1965. In total 440,000 of the 444 and 544 cars were produced from 1947 to 1965.

If you wish, you can CLICK HERE. for all our many other SmugMug Photo Galleries.
To return to TeamTerrificRacing.com CLICK HERE.
Read More 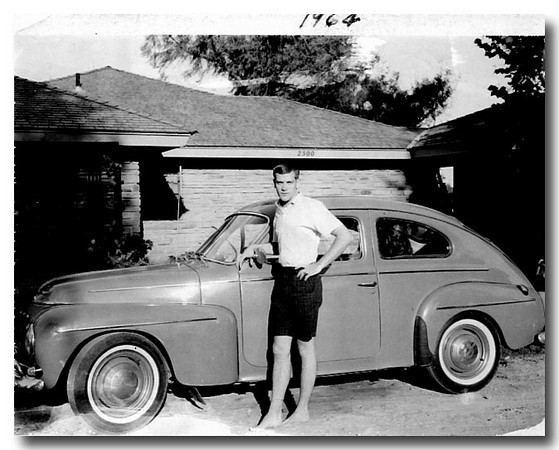 Yup, that's me in 1964 with my newly acquired 1962 Volvo 544 Sport. Drove it from Denver to my parent's home in Oklahoma City and back with, of course, no issues.